Many ‘fans’ had judged Star Wars: The Rise of Skywalker before they even saw a second of footage. As someone who grew up with Star Wars, I find the toxicity that has infected the fan-base a bitter pill indeed; it is by far the most toxic of the major sci-fi franchises. Star Trek and Doctor Who have their own levels of bitterness, but they don’t hold a candle to the sheer venom that has worked its way to the heart of Star Wars. I enjoyed The Force Awakens and I never saw the major problem with The Last Jedi; sure, the latter could have done without the CG-heavy Canto Bight sequences, but it was essentially a very entertaining piece of popular cinema. I am incapable of relating in any way, shape or form to the unspeakable breed of ‘fan’ who forced Kelly Marie Tran to quit social media with a barrage of sexual and racial abuse. That type of ‘fan’ has no place whatsoever in my world. With all of this in mind, here is my fond, impartial review of Star Wars: The Rise of Skywalker:

A Voice from the Grave! Declares the opening scroll of Star Wars: The Rise of Skywalker; somewhat melodramatic perhaps, but then these opening scrolls always were designed in homage to the old Flash Gordon serials, so it’s nothing to complain about. I mean, The Phantom Menace was a pretty cheesy title for a film in 1999, but it was in keeping with the whole Republic Serials vibe that Star Wars has conveyed from its very earliest days. The voice in question is the mellow tone of Ian McDiarmid as Emperor Palpatine – yes, he’s back! Seems he survived his deadly plunge at the end of Return of the Jedi and is now lurking in the ruins of Death Star II on a life-supporting armature somewhere between the Borg Queen and Overdog from Spacehunter: Adventures in the Forbidden Zone. The idea that the Emperor created Supreme Leader Snoke, killed by Kylo Ren in The Last Jedi, as a puppet to lure Ren and Rey to him is quite a good one, but if it was planned from the beginning by J.J. Abrams, it would have benefitted from being at least slightly hinted at in the earlier instalments. I couldn’t help thinking that the scenes of a resurrected Emperor rising up a fleet of dark Star Destroyers from the dust would have really fired up the imagination of fans if they’d been included at the beginning of the trilogy.

Meanwhile, Rey (Daisy Ridley) is being trained as a Jedi by Princess Leia, though sadly we don’t get to see any of the training due to the sad passing of Carrie Fisher following the last film. However, the scenes that they have put together for Leia using only trims from The Force Awakens are little short of miraculous! I’ve seen films before where actors have passed away during production, such as The Crow or Gladiator, and it’s always kind of obvious what they’ve done, but in this case, if you didn’t know about Ms. Fisher, you’d never even be able to tell that she wasn’t there for the filming. Some feared it’d be a poor send-off for their beloved character, but I think it was perfectly fitting. Rey still has a psychic link with Kylo Ren (Adam Driver), which is bad news as he’s been ordered by the Emperor to track her down with his private army, who look great but get insufficient screen time. Ren is a double-agent for the Emperor though and is secretly plotting to bring him down so that he can have complete control of the galaxy. 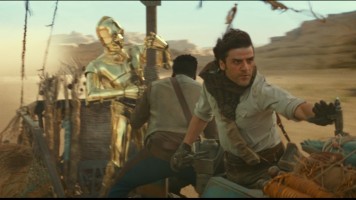 The team back in action

A lot of the plot has to do with a quest for a Sith artefact that can lead the good guys to where the Emperor is secretly amassing his forces, which feels a bit familiar as there was a quest in The Last Jedi, though this feels nowhere near as vapid as the trip to Canto Bight. Rey, Finn (John Boyega), Po Dameron (Oscar Isaac), C-3PO (Anthony Daniels) and Chewbacca (Joonas Suatamo, replacing the ate Peter Mayhew) all have a big chunk of the action and somewhere along the line, Lando Calrissian turns up, played as always by Billy Dee Williams; the last of the original trilogy stars to put in an appearance. Rose Tico (Kelly Marie Tran) gets to stay behind at the Rebel Base, which is being seen by many as a spurn, but she’s got more screen time than some of the click-bait internet articles would have you believe and I’m sure she’s been allocated some of the dialogue that would originally have been intended for Leia, so that’s a proud heritage and not at all a spurn. Besides, if she’d gone off with the others there’d have simply been too many characters to make a manageable story.

As most people would probably expect, there are guest appearances – or should that be ghost appearances? – from both Mark Hamill as Luke Skywalker and Harrison Ford as Han Solo. The story nicely contrasts the hard choices to be made by both Rey and Ren, and I personally loved the fact that it’s Rey’s conversation with Luke and Ren’s conversation with Han that allows them to find their true path with help from the original generation of heroes. The big revelation for Rey – and you were warned that there would be spoilers – is that she is the granddaughter of Emperor Palpatine and his involvement with Kylo Ren is chiefly to bring Rey to him so that he can turn her to the dark side and basically pass on the family business of universal domination. Rey confronts the Emperor while the Rebel fleet attacks the Star Destroyers, but she is out of her depth against the power of the dark side. Luckily, Ben Solo – having finally mustered the strength to throw off the persona of Kylo Ren – turns up and they battle the Emperor together. The fact that once he becomes a Solo again, Driver’s performance is wryly comic is something I found very pleasing. Contrastingly, when the Rebel fleet looks outnumbered, Lando Calrissian turns up with support from all over the galaxy (including a brief but welcome cameo from Denis Lawson as Wedge Antilles).

I judge a film like this on how many ‘shiver’ moments it gives me and there are several in The Rise of Skywalker. J.J. Abrams certainly knows how to tap into the nostalgia of the first generation of fans who were there in 1977; he was one and so am I. Anyone who didn’t feel something at the lightsabre battle between Rey and Ren among crashing waves must’ve set out with the intention of hating the film. The passing of Leia moved me far more than the deaths of Han or Luke in the previous movies, perhaps because of its connection with real-life events. But this isn’t a sad ending like the climax of Revenge of the Sith; it is a glorious new beginning for the people of a galaxy far, far away. It’s fitting that the saga ends where it began, on Tattooine, at the Skywalker moisture farm, the sets of which are still there to visit in Tunisia, some 43 years after they were built for the original Star Wars. Pleasing Star Wars fans is a thankless quest; everyone has a different idea of what they want from the series and seems intent on moaning if it doesn’t deliver. All that I’m qualified to comment on is how Star Wars: The Rise of Skywalker made me feel, and it made me feel happy, nostalgic and satisfied.

When I went to see Star Wars (and that’s what it was called, don’t argue) in 1977, I couldn’t possibly have conceived that over four decades later, movies based on the same scenario would still be topping the box office charts. Individually, I have enjoyed every one of the most recent trilogy, but I feel that there could have been more cohesion between them. The Force Awakens and The Rise of Skywalker, the two films directed by J.J. Abrams, felt like the beginning and end of a trilogy; but The Last Jedi felt more like a ‘Star Wars Story’ standalone piece. This is not a criticism of Rian Johnson or the film he made (which I very much enjoyed) just an observation that there was some element of connective tissue that was missing. Star Wars: The Rise of Skywalker is the last film in ‘The Skywalker Saga’ and it is fittingly and properly thus. Do I think it will be the last Star Wars movie? Not by a long chalk! But it was the end of this particular era and to this small boy from Sunderland in 1977, it left me with smile on my face and, when it boils down to its most basic level, that’s all that George Lucas, J.J. Abrams or anyone else could hope for.

May the Force be with you… always.