I’ve always been slightly obsessed with silent movies and longed to make one, even though the technology and the necessity of the silent medium have been long surpassed. Most people hear of the silent cinema and automatically think about slapstick comedies, but I’d become into the silent horrors of Lon Chaney Sr., the romantic comedies of Clara Bowe and many other types of silent movie that were made across the world in the era before The Jazz Singer brought sound to the silver screen.

Finally, in 2005, I decided that I was going to go ahead and write a silent short called The Russian Bride. The story of The Russian Bride tells of a lonely man (his mail names him as ‘George Peabody’, but he’s only ever called ‘The Man’ in the script) who sees an advert for Russian mail-order brides. What he’s not expecting is that she arrives in an envelope, a tiny sponge figure. I was inspired by those sponge dinosaurs that you soak in warm water and they quadruple in size, so when the Man soaks ‘The Bride’ in the bath, she blossoms into a gorgeous full-size living, breathing woman.

My group of friends were all experienced amateur film-makers, but we hadn’t done much in the last 4 or 5 years. As I was going to act in the film, I didn’t want to direct as well, plus I’d had some not-great experiences as a director; but luckily my cousin Neil Johnson agreed to come on board. Neil is also a fan of the silent cinema, so he knew exactly where I was coming from with this. Long time film-making colleagues Barry Williams and Rupert Booth agreed to make cameo appearances in the very small cast as the ‘Annoying Postman’ and the ‘Disapproving Vicar’ respectively. Shaun Whiteheart, a talented artist, designed a magazine cover and several ‘Russian’ stamps, which are hardly seen in the film, but the devil’s in the detail.

For the title role of the Bride herself, I was lucky in that Samantha Henley had recently become available for working on films. I had acted with Samme on Neil’s The Michael, a spoof of 70s cop show The Sweeney, and a couple of Rupert’s films. I’d also appeared as Adam alongside her Eve in a comedy sketch show that, probably mercifully in the case of this sketch, was never completed. In pre-production, Samme had her hair dyed blonde, but by the time we started shooting it had returned to its natural brunette, which is why the sponge figure, completed early in production, was blonde even though the Bride was dark haired. 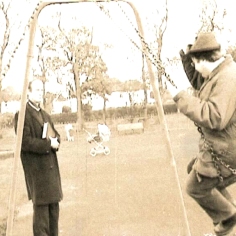 The Russian Bride around filmed in November 2005. It was quite a brisk production, with only a couple of days shooting. The main shoot was at my parents’ house in Cleadon, South Tyneside; where we shot all of the house interiors and the garden scenes. For the scenes where the Bride grows to full size in the bath, Samme announced just as we were about to film that she’d just had a weave put in her hair and she wasn’t sure if it was colour-fast! Unfortunately, it turned out not to be and the bath water quickly turned a murky brown, but as luck would have it, that’s not too visible in the monochrome footage – it would have been a lot more bothersome if we’d filmed in colour.

For the scenes in the garden, Samme had to sunbathe – but it was November! And a very cold November at that! As a Canadian, Samme must be acclimatised to cold weather, because she was more than happy to do these scenes in a bathing costume, even though the rest of us were wrapped up in coats and scarves. For part of the scenes, the Bride has to have beads of sweat on her brow; these were actually droplets from a sheet of ice that was floating on the top of the birdbath. Once again, thank goodness for monochrome, because with the contrast tweaked you would never think it was anything other than the height of Summer.

Later we filmed a montage scene in a local park. The leaves on the ground clearly show you what time of year it was in these, but it’s a good thing because it implies a passage of time. These were the scenes in which Rupert appears as the Disapproving Vicar, who crops up every time the Man and his Bride get close to being romantic. We shot lots of scenes with the Disapproving Vicar, but 90% of these were lost in the editing process, as Neil realised that the film was in serious danger of becoming ‘The Disapproving Vicar Show’. Talk about scene stealing, Rupert! 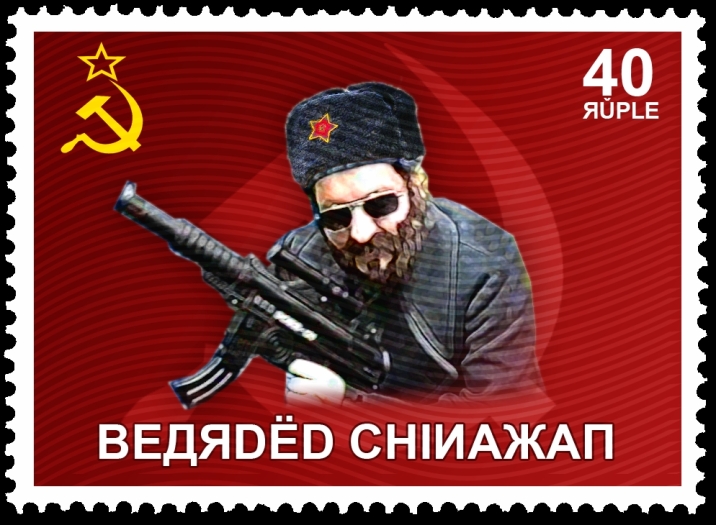 There was one final location shoot when Neil and I sloped off to Newcastle Upon Tyne to film the Man on a shopping trip. This was all shot guerrilla-style, with Neil basically following me (in costume) into shops with the camera. For a scene on the platform of the Tyne and wear Metro, we grabbed a shot of the train pulling into the station and then legged it as fast as we could, because you weren’t supposed to film on Metro property. These days, of course, it would be a lot easier because you could discretely film everything on a phone in quite high quality.

Neil edited together The Russian Bride with a temporary soundtrack of classical music by Aram Khachaturian, the main theme being Masquerade. He converted to footage to a sepia tone and added some pops and scratches to give it an aged look. Some of the footage was accidentally shot on an analogue instead of a digital tape, but the slight change in quality adds to the silent movie feel, where the film quality often varies alarmingly from reel to reel. A few scenes were lost in the edit; primarily the Vicar scenes mentioned earlier and a scene in which the Man and the Bride are horsing about under a duvet, only to reappear with her wearing his hat and glasses and him wearing her make-up! I got made up in eye shadow and lip-gloss for nothing. 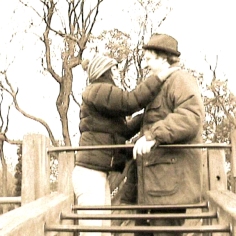 Fun in the Park 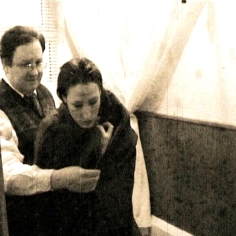 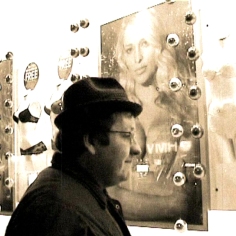 Walking in the Leaves 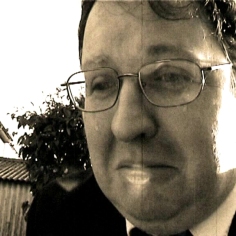 In 2006, we got the opportunity to premiere The Russian Bride at the Sutton International Film Festival, that was being run by our friend Marq English. For a long time we couldn’t find anyone suitable to score the film, but we got incredibly lucky quite late in the day by acquiring the services of Peter Falconer, an astoundingly good composer and musician. Peter’s soundtrack for The Russian Bride lifts the film to a whole different level and is perfectly in keeping with the silent movie style. Unfortunately, there was a terrible mix up when the film was shown at Sutton and the disc Neil had provided had a glitch meaning there was no sound on it. A replacement disc was supplied, but this one still had the temporary score on it! I’ll never forget coming out of the screening room and seeing Peter looking absolutely devastated; he’d come to Sutton specially to see his music on the big screen. I’ll never stop feeling partly guilty about that, although I apologised to Peter many times.

The Russian Bride was the last movie that we made for many, many years and I have a real soft spot for it. It captures the end of an era; the days when we could easily gather a group together for filming at weekends. Everything requires so much more organisation these days. But for Neil, Samme, Rupert, Barry, Peter and myself, we’ll always have the finished product of The Russian Bride. A silent classic? It is to me.